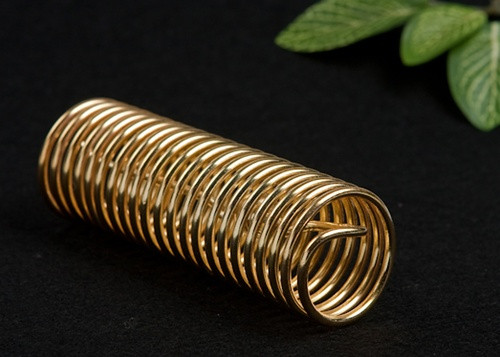 A Functional Art Form, based on the principles of the "Ring" with the addition of controlled polarity and flow. The "Coil" acts like a "Vacuum cleaner" for pain. In skin contact or non-contact modes it has been demonstrated to achieve states of relaxation, in a few minutes as monitored by bio-feedback equipment, which would normally require weeks or months of training to achieve.

A few highly skilled and intuitive practitioners report cases of broken bones knit in as little as twenty minutes with the "Coil".

Other lay practitioners report reduction of swelling and bone knitting in as little as 1 hour with a combination of "Coil", "Ring", "Feedback Loop"and wet towel wrap under field conditions far from civilization.

Chronic low back pain classically is relieved very significally in 45 minutes to 1 1/2 hours in a session with the client standing.

This is not a medical device.

Jerry from Source Books has used this product for years.