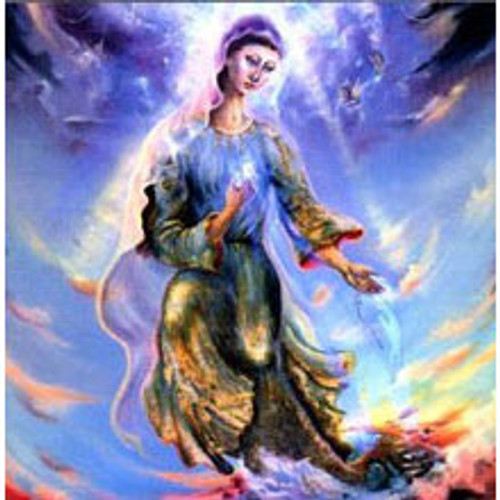 "Our Lady of the Universe" (Cover) painted by Jacqueline Ripstein

In his book, Emissary of Light, James F. Twyman wrote about an amazing adventure into the mountains of Bosnia where he met and learned from a secret society said to have existed for thousands of years. but who were these Emissaries and where did they come from? that question is answered in the book, The Secret of the Beloved Disciple.

"A community founded by the Apostle John has lived in seclusion for two thousand years. The time has finally come for its amazing secret to be revealed." Excerpt, The Secret of the Beloved Disciple

The music and art that made the story come alive was recorded in December, 1998, at the Presidio Chapel in San Francisco. This simple recording is reproduced exactly as it was heard that night. No recording effects have been added to the songs. Maria promised to imprint her energy into the music, just as she had already done with Jacqueline Ripstein's painting. "Our Lady of the Universe" (reproduced on the cover). The final song, "The Message," is the historic moment this promise was fulfilled.

Open your heart to Her message.

Our Lady of the Universe
The Hail Mary
Fr. Joso's Prayer
Ave Maria
The Message

Journeys Into Past Lives (CD)