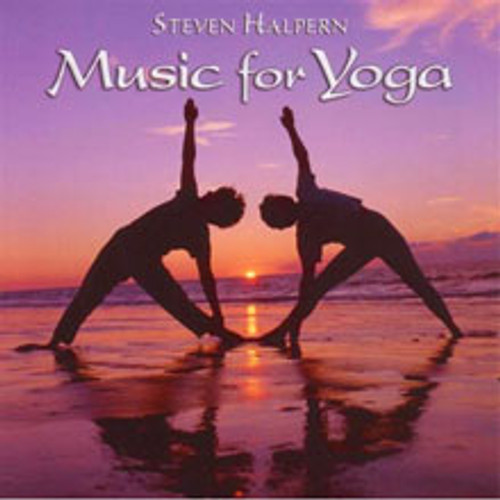 A Personal Note about Music and Yoga from Steven Halpern:

In 1967, as a sophomore at the University of Buffalo, I was introduced to yoga by a friend. He was doing a shoulder stand on the lawn outside the student union and challenged me to join him.

I liked how the posture made me feel. However, since there weren’t any trained yoga teachers on campus, my instruction came from books. Being a fast-moving New Yorker, I thought I was “doing yoga” when I completed a series of asanas in only five minutes!

Like many people, I found it challenging to quiet my mind while holding the postures. It wasn’t until several years later that I learned from a “live” teacher that “speed is not a virtue” in relation to yoga.

About this time I began playing the meditative music for which I’ve become known. I recall my first session doing yoga while listening to my own homemade tape — it transformed my practice!

The music helped me focus on my breath and on the creative edge of the stretch.  My breathing became deeper and slower. As you will soon discover, it will have the same effect on you.

My earliest supporters include renowned yoga teachers like Lilias Folan, Charles Muir and Mark Becker. Many others, such as Baron Baptiste and Cyndi Lee, now play my music in their classes, and untold numbers of students listen while practicing at home.

One of my fondest memories is the look on the studio engineer’s face when I did a headstand in the recording studio in 1975. My yoga practice has always been a part of my recording process, and as such, an integral foundation of my compositions.

Meditation to the Crystal Elohim: Invocations for Teachers, Healers And Everyone (CD)

Molecules of Emotion: The Science Behind Mind-Body Medicine (Book)