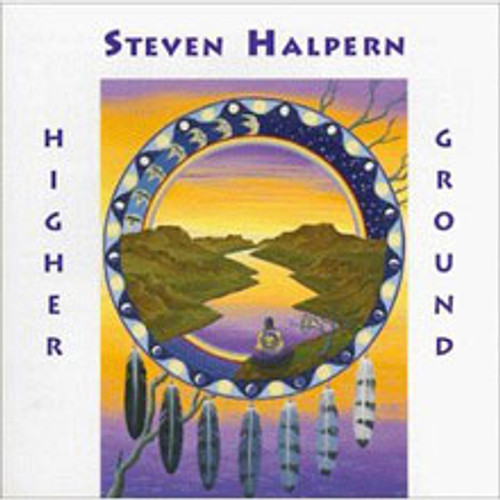 “Higher ground I & II” On the way to a scheduled recording session, I spontaneously ‘happened’ to stop in at my favorite music store. The chief alesman, who was familar with my music, said, “You’ve got to hear this new keyboard. It just came in this morning.”

Coincidence? You be the judge. As soon as he turned on the instrument, I was mesmerized by the sound. I played the chord that opens the album, and my head filled with music, as if I had tuned into a radio station. It was a wonderful feeling, and I was hooked immediately.

Two hours later, I was in the recording studio. These songs came through during the sound check. I couldn’t take my hands off the keyboard, and heard
the entire compositions in an instant. My engineer knew there was magic in the air, and kept the tape rolling. The songs literally “played themselves” as
the music unfolded in real time, as if they had a life of their own.

“Communion” was inspired by a highly sensitive woman whom I first met in Egypt in 1980. Out of the blue, she called me in 1988 and said “I bring
a message from some old friends from far away…the Pleiadians.” That was the beginning of an extraordinary series of events. Brenda sat next to me
on the piano bench in the studio. I was aware of an extraordinary delicacy of vibrational elevation, and this soundscape manifested to assist in our
atunement with energies of light and love.

“48 Hours” was composed ‘live’ in the recording studio while I was being filmed for a featured segment on CBS–TV’s ‘48 Hours.  I showed the producer and crew how I could amplify the meditative and relaxing effect of the music with the addition of “sonic entrainment technology.” These are the audio
tones that produce the ‘binaural beat effect’ at the beginning of this song. These matrix guides you into the deep alpha brainwave range of 7.83 cycles per second, which is.the Earth resonance frequency.

They were blown away. We all looked forward to sharing this experience with mainstream America. Alas, when the segment finally aired, only a very brief snippet made the final cut.  Now, you get to enjoy the entire experience.

“Crystal Cave” enhances the sound of pure crystal bowls (which are featured on my album CRYSTAL BOWL HEALING” with entrainment tones in the theta brainwave range.

“Pleiadian Consort i” features Dr. Fred Bell, a former NASA scientist, bestselling author and contactee. He happened to be in town on the day that I was finishing the album. I invited him to drop by, and he added the special effects dialed in from his keyboard.

“Power Point ii & iii” add the powerful effect of a Grandfather Rattle to the sound of the heartbeat drum. The combination provides an additional
dimension to the overall experience that transforms and intensifies the tranceinducing effects.

White Whales of the North (CD)