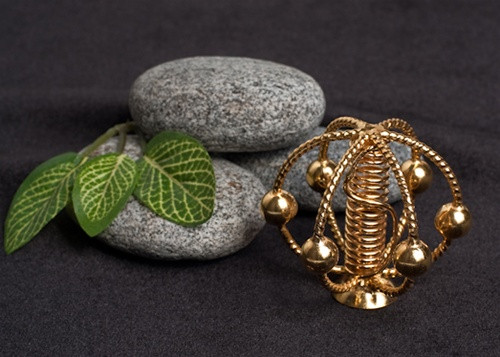 The Harmonizer was developed experimentally from three Light-Life™ Rings and an Acu-Vac Coil. Initially we sought to provide an art form, that would give relief from the electro-smog in the modern environment for those who are sensitive to that area of modern day pollution; it worked.

The extraordinary clairvoyants who joined in this early research easily defined the field radius at 100'- in all directions! With a 200' spherical "comfort zone" an Environmental Harmonizer seems to nicely reduce the electro-smog discomfort in even a large home. Subsequent verification by "High-tech" electronics, "Low-tech" dowsing and direct observation has confirmed the original clairvoyants description of the spherical field.

In the Spring of 1994 we discovered that by applying specific sound frequency patterns from a close by set of earphones or a common  portable cd player the spherical radius of the field could be expanded to a 15 mile radius and the indoor and outdoor air in that radius smelled distinctly of the natural ozone produced by a mountain meadow in the Spring - for hours and even days.

Here are some recommendationed uses for the Environmental Harmonizers: