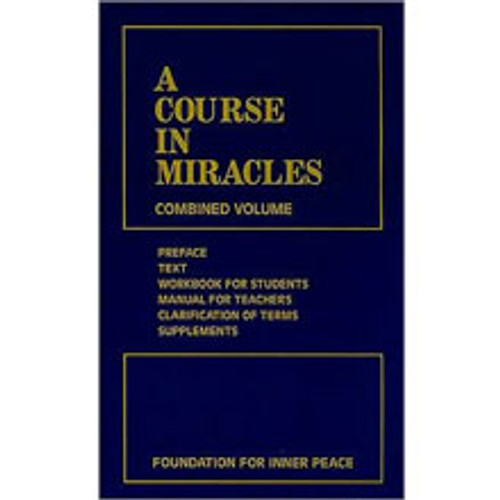 A Course in Miracles is a complete self-study spiritual thought system that teaches that the way to universal love and peace - or remembering God - is by undoing guilt through forgiving others, healing our relationships and making them holy. Emphasizing that it is but one version of the universal curriculum, it uses the language of traditional Christianity, but expresses a non-sectarian, non-denominational spirituality. Over 2-million English language copies in print.  As its title implies, the Course is arranged throughout as a teaching device.

The curriculum the Course proposes is carefully conceived and is explained, step by step, at both the theoretical and practical levels. It emphasizes application rather than theory, and experience rather than theology. Although Christian in statement, the Course deals with universal spiritual themes. It emphasizes that it is but one version of the universal curriculum. There are many others, this one differing from them only in form. They all lead to God in the end.

The Text is largely theoretical, and sets forth the concepts on which the Course's thought system is based. Its ideas contain the foundation for the Workbook's lessons. Without the practical application the Workbook provides, the Text would remain largely a series of abstractions which would hardly suffice to bring about the thought reversal at which the Course aims.

The Workbook includes 365 lessons, one for each day of the year. It is not necessary, however, to do the lessons at that tempo, and one might want to remain with a particularly appealing lesson for more than one day. The practical nature of the Workbook is underscored by the introduction to its lessons, which emphasizes experience through application rather than a prior commitment to a spiritual goal:

Some of the ideas the workbook presents you will find hard to believe, and others may seem to be quite startling. This does not matter. You are merely asked to apply the ideas as you are directed to do. You are not asked to judge them at all. You are asked only to use them. It is their use that will give them meaning to you, and will show you that they are true.

Finally, the Manual for Teachers, which is written in question and answer form, provides answers to some of the more likely questions a student might ask. It also includes a clarification of a number of the terms the Course uses, explaining them within the theoretical framework of the Text.

The Course makes no claim to finality, nor are the Workbook lessons intended to bring the student's learning to completion. At the end, the reader is left in the hands of his or her own Internal Teacher, Who will direct all subsequent learning as He sees fit.

Love Never Dies: How To Reconnect and Make Peace With The Deceased - Autographed Copy