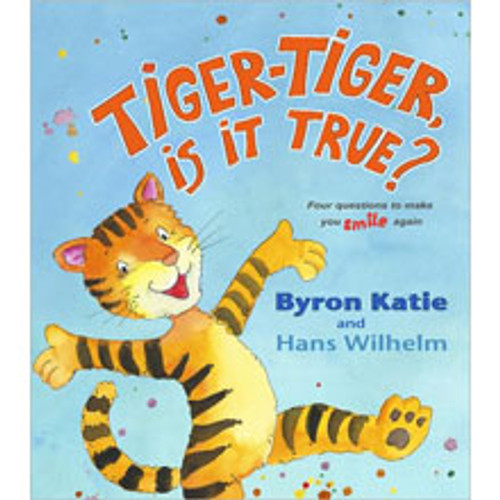 Tiger-Tiger, Is It True? is a story about a little tiger who thinks that his whole world is falling apart: his parents don’t love him, his friends have abandoned him, and life is unfair. But a wise turtle asks him four questions, and everything changes. He realizes that all his problems are not caused by things, but by his thoughts about things; and that when he questions his thoughts, life becomes wonderful again.

In Byron Katie's notes she encourages dialog between the reader and the child:

...The Work, which forms the basis of this story, is a way to identify and question the thoughts that cause all the suffering in the world.  It is a way to find peace with yourself and with the world.  The old, the young, the sick, and well, the educated, the uneducated, anyone with an open mind can do this Work.

Those of you who are interested in learning how to do The Work, yourselves or with your children, will find everything you need to know in my book Loving What Is, or on y website, www.thework.com

This is a heartwarming story with a powerful message that can transform the lives of even very young children. Byron Katie’s wisdom-filled words and Hans Wilhelm’s vivid, magical illustrations combine to make a book that will become one of the classics of children’s literature.

If you have a child that is last to be picked for sports, seems to think the world is a horrible place, thinks he/she has no friends, or that nobody cares, this is the book that will start a positive dialog and 'turn' things around.

Little Soul and the Sun: A Children's Parable Adapted from Conversations with God (Book)

Little Soul and the Earth: I'm Somebody! (Book)

No Excuses: How What You Say Can Get In Your Way (Book)