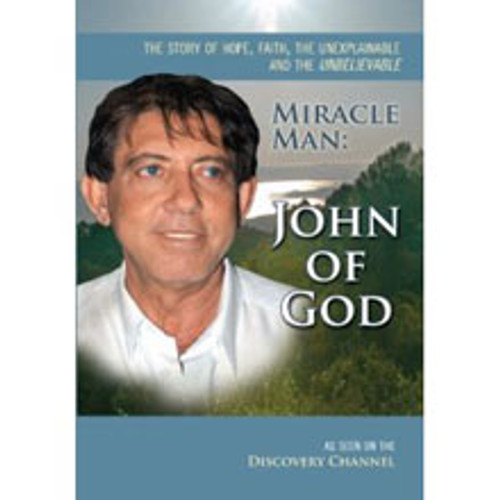 This film will challenge your understanding of how we interact with the spirit world and the notions of healing with assistance from the other side.

Just outside the small town of Abadiania, Brazil, one of the most unusual people in the world is about to see a group of strangers dressed in white. He is known to westerners as John of God. They call him a spiritual medium, trance surgeon, healer and miracle worker. What he does and how he does it defies conventional logic.

For over 40 years, John of God has received visitors as a doctor might receive patients. Even though he is not a doctor and has no formal schooling beyond the fourth grade, he has performed countless physical operations — for free. He uses no anesthesia and patients report little pain. He scraps eyes, inserts surgical clamps up noses and makes incisions with simple instruments — all while he is supposedly taken over by spirits. There is very little bleeding, few reports of infections and numerous reports of improved health — both spiritually and physically.

John of God says that God and over 30 compassionate spirits are working through him and he does not remember what he did once he comes out of his trance. We watch him perform these unusual surgeries and follow several people from around the world with various physical problems as they seek help from him and the spirit world.

Laura Van Wagner from Maui has come to John of God to treat a life threatening cancer. Her lymphoma is causing rapid tumor growth in her throat. Kristy First was paralyzed in a car accident in Florida and wants to regain the use of her legs. Roland Nip from Honolulu has been diagnosed with defective heart valve. Izzy Zalcberg, who suffers from depression has traveled from Chicago to Brazil with his wife who has been diagnosed with an incurable cancer. Lynn Debenham, the south of England, will undergo a physical surgery to remove a tumor on her back.

Doctors, as well as patients, are constantly traveling to Brazil to observe the man who can reportedly heal others using spiritual assistance. Reverend Doug Busby, MD from LaPorte, Indiana is a doctor who specializes in preventive medicine. For him, John of God may hold the key to connecting the world of prayer and healing. Philip Bechtel, MD is a neurosurgeon from Fort Worth, Texas who has been to see John of God eleven times. He operates on the deadliest of brain tumors and is looking for a means to help his desperately ill patients. These two highly respected medical doctors have not only observed John of God on several occasions, they have assisted him with surgery. They offer their opinions as to what might be occurring at the healing center known as the Casa de Dom Inacio.

Songs of the Spirit 2 (Karaoke CD)