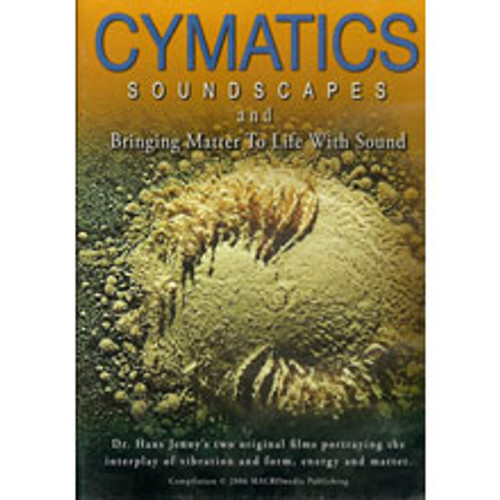 The two rare films originally made by Hans Jenny around 1970 are now available together on a single DVD called Cymatics Soundscapes: Bringing Matter to Life with Sound.

The study of wave phenomena and vibration was pioneered by the Swiss physician and Renaissance man Hans Jenny. Inspired by Rudolf Steiner, Dr. Jenny's penetrating observations of distinct types of patterns in nature led to these dramatic experiments animating inert substances with audible sound.

The stunning array of images seen in these two films are actual physical phenomena evolving before your eyes as audible sound excites various liquids, powders, pastes and iron filings into processes which mimic atomic, geologic, biological, solar and even galactic shapes and movements. Amazing in this day and age, absolutely no computer-generated images appear in these films.

Caution: Viewing this remarkable scientific artistry can profoundly alter the way you view your world!

"Dr. Jenny's cymatic images are truly awe-inspiring, not only for their visual beauty in portraying the inherent responsiveness of matter to sound (vibration) but because they inspire a deep recognition that we are part of this complex and intricate vibrational matrix, suggesting that the subtle vibrations of our very thoughts and feelings may have great effect on what will manifest in the physical world." — Jeff Volk, series producer

This Science was often shown during Gregg Braden's live seminars and was studied long before Masuro Emoto's work with water.